Peter was part of the team responsible for the acoustic design, and John was the lead sound reinforcement systems consultant.

An audio recording of the presentations and question time is available for listening or downloading here (duration 1hr36min).

Peter explained that the Hamer Hall (previously known as the Melbourne Concert Hall) original design had been done in the 1970’s, when it was predominately a Classical Music performance hall, hosting mainly Symphony Orchestra work. That originally comprised 80% of its usage with the rest smaller scale amplified music (jazz etc). Now the usage pattern has shifted to include large scale amplified concerts and even speech-based applications like school functions and conferences – with only 35% use being Classical in nature.

This shift in use, together with the advances in acoustic design knowledge, the need to make the hall more accessible especially from the river frontage, and the aging of the seating and machinery is what drove the Hall operators to embark on the major renovation.

Peter described the existing design, and their process of assessing the current performance by subjective and objective means. They were able to tap into the experiences of the musicians and other users of the Hall to identify areas where the performance could be improved.

He outlined the project goals:
Improve hearing for musicians on stage
Improve communication between stage and audience
Improve envelopment for the audience
Improve clarity of the sound
Improve bass response in the room – especially in the balcony
Allow for greater operational efficiency in the Hall

Then Peter enumerated the strategies to achieve the goals:
Increase useful reflections for the musicians
Simplify the sound paths within the stage volume
Improve sound transmission between the stage and the audience
Increase the lateral sound paths – increase sense of aural envelopment
Remove low frequency absorption – especially close to the stage
Remove harshness in upper dynamics (an issue identified in user interviews)

Peter then described the various changes made to the Hall – items like the redesign of the over-stage reflectors to reduce the conflict between lighting and reflector positioning, simplifying the stage side wall geometry and better coupling the side walls to the body of the hall, and changing the treatment on the auditorium upper walls. Though, apparently, the latter was restricted somewhat by the fact that the Hall is Heritage-Listed and changes to the appearance of this highly visible treatment were not permitted.
(A 35 year-old Concert Hall being Heritage-Listed was a surprise to many listeners indeed!)
A myriad of other smaller changes were described, culminating in Peter presenting the final results. Objective tests (both with and without audience present) showed a slightly reduced reverberation time – with a marked increase in C80 (Clarity measure), especially in the Balcony seating, and an improvement in sensitivity – such that smaller ensembles playing softly can be heard clearly at the extremes of the Hall.
Subjectively, feedback from musicians, other performers and music critics showed that the objectives of improving the concert experience for both the musicians and the audience had been met.

Following Peter’s presentation, John Alekna then described the sound system design, going into great detail about the improvements to the speaker clusters to improve coverage and quality, whilst achieving a cleaner appearance. He described the system – 168 Meyer loudspeakers (of various types) driven from 100 outputs of D-Mitri Digital Audio Platforms, all driven by a DigiCo digital console.

A long and lively Q&A session followed the presentations, where both presenters proved very generous with their knowledge and experiences 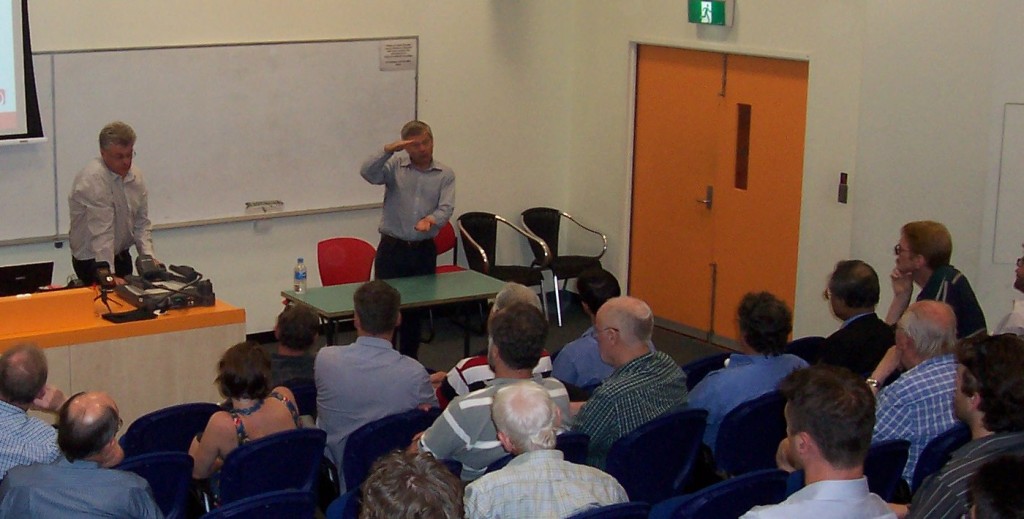 During the Q&A session, Peter Exton describes some dimensional aspect of his design.
Special thanks to Jim Barbour for arranging the Swinburne venue yet again for us, and to Graham Haynes (and his trusty Tascam) for making the audio recording.

or to download here right-click and select “Save link as…” (duration 1hr36min).