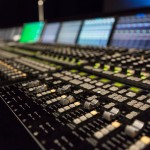 We were hosted by Sound Supervisor Chris Goodes, who firstly provided a short tour of the various mix rooms and mixing theatres which make up the facility.

Following the tour, we all reassembled in the main mixing theatre, Theatre 1 where Chris provided a very interesting presentation on cinema sound generally, and Dolby Atmos specifically.

Chris started out with a quick overview of the history  of sound for film – starting with optical sound, progressing through Dolby Stereo, X-Curve, THX, to Dolby and DTS Surround systems and then finally to the current state of the art: Dolby Atmos and Auro3D.

He then described the 9.1 topography of Atmos – “Left-Centre-Right, Left Wall, Right Wall, Left Rear Wall, Right Rear Wall, plus two rows of speakers across the ceiling – Left and Right Top” which comprise the 9.1 bed

He then went into detail as to the Atmos methodology of sound “objects”, which can be independently manipulated in a 3D space which is recreated in the cinema by the addition of more speakers, including ceiling speakers. He explained that this mixing theatre has a total of 47 speakers, and Dolby Amos supports up to 64 for the largest size cinema, with a typical example being about 40. He explained that there is not a 1:1 relationship between the number of speakers and the number of playback tracks – the panning information is stored as metadata and the playback processor renders it in real-time and steers it to the appropriate speaker(s).

He contrasted that with Barco’s Auro3D which he explained does not have objects, and is basically a 5.1 with another 5.1 on top of it.

He then described the changes in workflow from the bi-phase locked 35mm magnetic dubbers, through timecode sync’ed multi-track tape to automated consoles and finally digital workstations and non-linear editing.

He then described the hardware associated with Atmos – the Dolby Rendering and Mastering Unit (RMU) used during the creation process and the complementary Dolby CP850 Cinema Processor for Atmos Theatre playback.  The salient features of the Harrison Trion console were then described in some detail. He then mentioned the five ProTools machines attached to the console – giving the capability for playing back about 1500 voices at the one time.

To give his audience a taste of the capabilities of Dolby Atmos, Chris played back a Dolby promotional video, and some examples of his film work, notably the feature Paper Planes which is currently in cinemas, providing some interesting insights into the processes involved in sound design and mixing for an Atmos film.

The evening concluded with an extended Q&A period, where Chris was most generous with his knowledge and experience.

An audio recording of Chris’ presentation can be replayed or downloaded here.
Note: The presented examples of Dolby Atmos sound have been deleted for copyright reasons (and the pointlessness of reproducing a mere stereo recording of an Amos demo)

Thanks to Graham Haynes for the audio recording.