On Monday August 11th, 16 members and 10 guests assembled in the SAE Melbourne Lecture Theatre for the Annual General Meeting of the AES Melbourne Section, and to hear Mark Döhmann speak on the topic High End Turntable Design.

For a report on the business of the AGM, and the Election of Officers and Committee see this earlier post 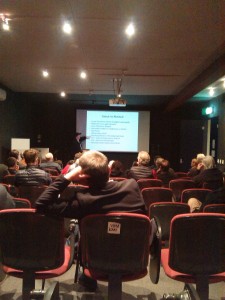 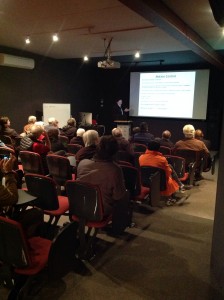 Mark began with short explanation of his background, concentrating on his development of the Continuum turntables, starting in the late 1980s, and emerging as the “no holds barred” Caliburn high-end turntable which he took to the Consumer Electronics Show in Las Vegas. The Caliburn achieved the ultimate accolade of “The World’s Best Turntable” from Stereophile magazine, as well as several other awards. It is still the only turntable to achieve the A+ classification in Stereophile’s 2014 Recommended Components – Turntables & Tonearms listing. As Mark said – “not bad for an Australian designed and built product”.

He then posed the (rhetorical) question as to why go to all the trouble in the face of the more convenient digital formats and platforms. He posited that good vinyl playback creates an emotional response in people that you do not see in digital formats – relaxation occurs, and people will listen much longer.
He also commented that, as musicians began to understand the benefits and appeal of vinyl, more new releases were becoming available on vinyl. It was no longer the case that availability was only restricted to older content.

Mark then described, in great detail, his Caliburn turntable and its companion advanced-construction Cobra tonearm, which were a collaborative design by many experts in a range of fields. This is an amazing design with advanced features like vacuum hold-down, a high mass (40kg) turntable, and a motor drive separate from the turntable frame. He pointed out that the high turntable mass created a significant bearing design problem, which was solved by a fully shielded magnetic levitation system, designed by local AES member Michail Barabasz, which was able to “bleed’ most of the pressure off the bearing – reducing the 40kg mass to only 2kg on the point load. He also described the oil pressurization of the bearings which provided a tight vacuum seal, allowing the vacuum pump to be turned off during the playback cycle without losing the vacuum.

Mark then described the vinyl cutting process, and identified a most important parameter imposed by the process, the cutting angle (Stylus Rake Angle). He nominated 92deg as the most common angle – this being the optimum stylus angle for the cutterhead to allow the detritus (“swarf”) to be efficiently removed from around the stylus by suction.

After showing a photo of the venerable Neumann VMS70 cutting lathe, and describing its various parts, he moved on to describe the types playback turntables – rim drive, belt drive and direct drive, outlining each’s benefits and shortcomings.
He also touched on the issue of the expertise needed at the HiFi retail level to advise purchasers on the correct setup of their high-end turntable purchase. Apparently with the advent of CDs, that expertise has been lost, and work needs to be done to restore it.

He then covered the issues associated with accurately tracking the groove created by the linear motion of a cutterhead (worm-drive) with a pivoted (radial) tonearm, commenting that the offset angle to reduce lateral tracking error is critical. He also highlighted the skating forces associated with the pivoted arm, making anti-skating systems necessary.

He also mentioned that for modern non-spherical stylus tip-shapes another parameter, Azimuth (correct horizontal orientation in the groove), was important – but unfortunately that is a measurement that needs complex measuring equipment and cannot easily be done outside the test lab.
Problems with quality control in stylus manufacturing, particularly in the area of Stylus Rake Angle, were also mentioned. This is an unavoidable by-product of a hand-made process in what can be, for the manufacturer, a very niche market segment.

The evening concluded with an extended Q&A session covering a range of vinyl playback topics. The scope of the questioning, and the level of interest in the audience suggests that the “vinyl revival” is not a mirage, and this is a topic we will be revisiting in the future.

A special thanks to Mark Döhmann for what turned out to be a most illuminating and interesting talk.

Thanks are also due to SAE, specifically Andrew Broadhead and Paul Edwards for providing the excellent venue – one we hope to be able to take advantage of for the foreseeable future.