Audio recording of Graeme’s presentation can be played or downloaded here.

The presentation left no doubt that the surround sound “sweet spot” constraints— listener location restrictions and fixed forward perspectives; can now be eliminated. 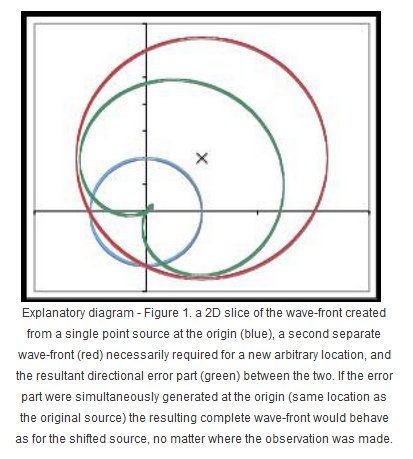 The session began with a summary of surround sound evolution explaining the motivations and key technical milestones. Graeme explained that surround sound formats were conceived and have evolved principally to augment cinema visual experiences. the key sweet spot restrictions of a fixed forward perspective and restricted audience locations remain despite increasing channel counts, and there is an assumption of end to end channel associated reproduction. Alternative approaches including the head related transfer functions and ambisonics were also discussed.

The nature of the sweet spot was then explored using a vector wave analysis approach. This showed a clear difference between a placed live sound source and a stereo or surround rendition and was most informative in demonstrating that even with ideal omni-directional loudspeakers the sweet spot restriction will remain.

The presentation then went on to show how it was possible to modify the sound field from an omni-directional loudspeaker so that the result would measure and sound as if it came from a different location than the loudspeaker, no matter where the observation was made.

The accompanying graph (Fig 1 – attached) is taken from the presentation and shows a 2D slice of the wave-front created from a single point source at the origin (blue), a second separate wave-front (red) necessarily required for a new arbitrary location, and the resultant directional error part (green) between the two. If the error part were simultaneously generated at the origin (same location as the original source) the resulting complete wave-front would behave as for the shifted source, no matter where the observation was made.

The implication was that if this Vector Wave-Front approach were used, sound sources could be arbitrarily rendered to appear at fixed locations in space and would remain fixed no matter where the listener was located or moved. The sweet spot restriction of surround could be eliminated.

It was explained that the Vector approach must consider source and listener location including both Distance and Direction (DD) aspects. This was a fundamental difference between DD and the present day surround approaches that have only ever considered direction information alone.

The presentation was discussing acoustics, but two audience members who worked with directional broadcast antenna arrays found this step to be somewhat of a revelation, succinctly describing behaviour in acoustic waves that they knew by theory and observation in radio wave behaviours over the years.
Next, three methods of creating the necessary controlled directivity wave-fronts were described. These were the simultaneous use of two controlled directivity sources, (very much as in the graphical example just given, and quite difficult), the use of end-fire arrays and use of broad-fire arrays. Of these, the latter two approaches were then further explained by way of the two known and separate implementations of the approach, – Huonlabs Vector Wave Front (VWF) and Fraunhofer Wave Field Synthesis (WFS) respectively.
The latter two implementations were then compared. It was explained that the VWF format in particular was backward compatible with existing stereo and surround formats and that in its basic form required less channels than present-day 5.1 surround.

The impact of the DD formats on the end to end production chain from capture to edit storage, encoding, distribution, decoding and render was then examined. It was pointed out that the present perceptual compression strategies would need reconsideration in a DD world.

The audience was left in no doubt that these developments were not simply an incremental extension of surround sound formats, and could indeed be the next wave

Other business or activities at the meeting:

Graham Williams of RMIT spoke to the group about the difficulty of currently maintaining electronics courses at a trade and para-professional level due to poor enrollments caused by a combination of a long-term decline in recruitment in the field, and the current economic conditions. He expressed a hope that the Section could contribute to the education debate, and encouraged employers to take on apprentices and trainees.