Bill Armstrong
A Life in Audio

Bill Armstrong has been active in Australian recording since the late 1940’s and his Armstrong Studios was a force in both the Australian music recording and commercial voiceover industries in the ‘60’s and the ‘70’s when a great majority of the hit records and a fair proportion of the produced commercials heard on radio came from his Albert Road and Bank Street studios.

After starting as a youth in the 1940’s working out of his parental home doing location recording with his Pyrox wire recorder, he progressed to W&G Records, 3DB Radio, and Telefilm. 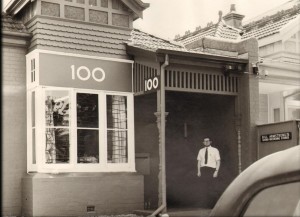 In 1965 Bill struck out on his own, building a studio in a small rented terrace house in Albert Rd, South Melbourne.

At Albert Road, Bill embarked on a fruitful collaboration with equipment designer and manufacturer Graham Thirkell, which resulted in Armstrong Studios employing his locally designed and built Optro recording equipment, which was at the cutting edge (bleeding edge?) of the state-of-the-art globally

Employing world-class recording engineers like Roger Savage and Ernie Rose, coupled with the top technology, Bill’s Armstrong Studios enjoyed an unassailable position in the pantheon of local world-class recording venues, resulting in not only attracting the cream of local artists, but also many visiting international artists who chose to record at Armstrongs.

After spreading his operations across several terrace houses along Albert Road, he finally outgrew the Albert Road location, and moved to a new location at 180 Bank Street which he had converted, at no small expense, into a five studio complex – which was, at the time, the largest in the Southern Hemisphere.

In 1978 the Australian Government established ethnic radio stations 2EA and 3EA to provide muti-lingual radio broadcasting to the migrant communities in Sydney and Melbourne. Bill Armstrong was contracted to provide studios and technical/operations staff for these stations until 1989 when, as part of The Special Broadcasting Service (SBS), they established their own facilities.

In 1979 Bill was part of a consortium which successfully applied for one of the two initial Melbourne commercial FM licences. Amongst a field of nine applicants (for two licences), Melbourne FM Radio Pty Ltd stood out with its strong mix of entertainment and business heavyweights. With the callsign EON-FM (3EON) the station went to air in July 1980, and Bill served as its Managing Director until its sale to the 2MMM interests in 1986.

Following the sale of his interest in EON-FM (now TripleM – 3MMM), in 1986 the Government appointed Bill to the media regulator, The Australian Broadcasting Tribunal (ABT).

He served on the Tribunal for two years and participated in many ABT hearings involving media ownership and takeovers, Australian music content on radio, children’s content on TV, and the granting and renewal of radio and TV licences.

Bill Armstrong is still active in music recording and publishing, particularly in his beloved field of Australian jazz. Checking out the website of his company Bilarm Music shows a broad catalogue of CDs available.

Awards:
The sheer volume of awards presented to Bill Armstrong bear witness to the contribution this man has made to the music and recording industries

Bill was presented with a Lifetime Achievement Award at the AES Regional Conference in Sydney in 1995, for his achievements in recording and broadcasting production and administration (Audio Engineering Society)

In 1999, along with his long-time collaborator Rod Tudor (Fable Records), Bill was presented with an Aria Special Achievement Award (Australian Record Industry Association).

Bill was also awarded an Advance Australia award for his contribution to the industry.

In 2006 he was presented with the Ted Albert Award for Outstanding Services to Australian Music at the APRA Music Awards (Aust Performing Rights Association).

In 2011 he was awarded the NFSA Cochrane-Smith Award for Sound Heritage, for his contribution to documenting the industry, via oral history interviews with key industry players, and re-mastering and re-releasing seminal Australian recordings (National Film and Sound Archive).

In 2015 Bill Armstrong was awarded an AM in the Queen’s Birthday Honours.
That same year he was inducted into the Music Victoria Hall of Fame.

The AES Melbourne Section thanks Bill Armstrong for his generosity in time and effort in assisting us in the preparation of this material.
We also thank Naomi Ryan for her help coordinating things, Mark Edwards for his videography and editing work, Graeme Huon for his efforts, ideas, and sage advice.